The B.1.1.529 variant was first spotted in Botswana and six cases have been found in South Africa

Scientists have said a new Covid variant that carries an “extremely high number” of mutations may drive further waves of disease by evading the body’s defences.

Only 10 cases in three countries have been confirmed by genomic sequencing, but the variant has sparked serious concern among some researchers because a number of the mutations may help the virus evade immunity.

The variant was first spotted in Botswana, where three cases have now been sequenced. Six more have been confirmed in South Africa, and one in Hong Kong in a traveller returning from South Africa.

Dr Tom Peacock, a virologist at Imperial College London, posted details of the new variant on a genome-sharing website, noting that the “incredibly high amount of spike mutations suggest this could be of real concern”. (continues) 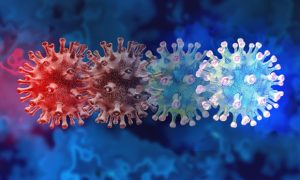 real concern’ but may just be an ‘odd cluster’. Photograph: Brain Light/Alamy